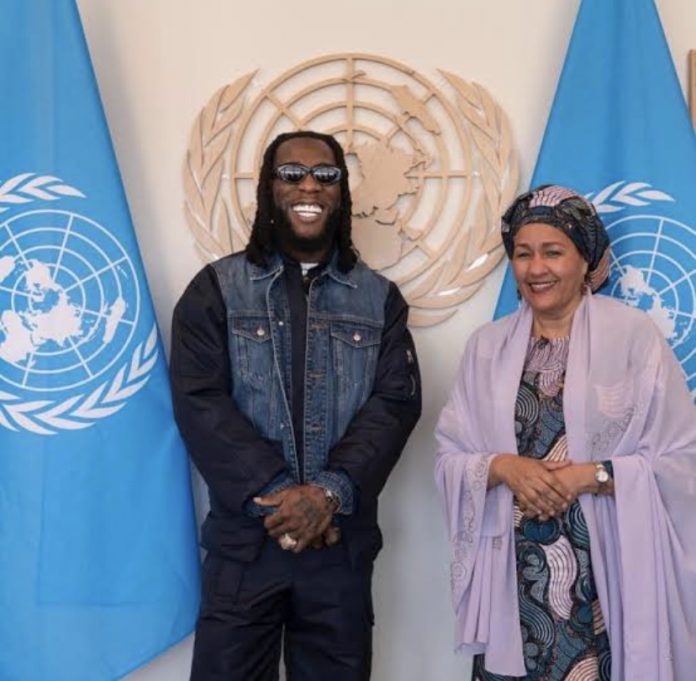 Grammy award-winning singer, Burna Boy, has explored the headquarters of the United Nations in New York.

The singer did this as part of plans along with his sold-out show at Madison Square, yesterday.

Burna Boy arrived in New York City yesterday and thereafter went to pay a courtesy visit to the UN HQ alongside his mom and manager, Bose Ogulu.

He sang an informed and knowledgeable song while holding the Nigerian flag among other flags of the world.

Also, he was able to meet with the UN Deputy Secretary-General, Nigeria’s Amina Mohammed who described him as her compatriot, one who inspires the young people worldwide in her post on Twitter.

“I had the opportunity to welcome my compatriot @burnaboy here at the @UN HQ.

“Burna continues to inspire young people around the world with his amazing talents,” she tweeted.

Also, the singer replicated that by posting a video of himself singing.

Damini Ebunoluwa Ogulu, known professionally as Burna Boy, is a Nigerian singer and rapper. He rose to stardom in 2012 after releasing “Like to Party”, the lead single from his debut studio album L.I.F.E.

I got my stage name from the name my dad called...

“Some of y’all are clearly still pained I made top 5...