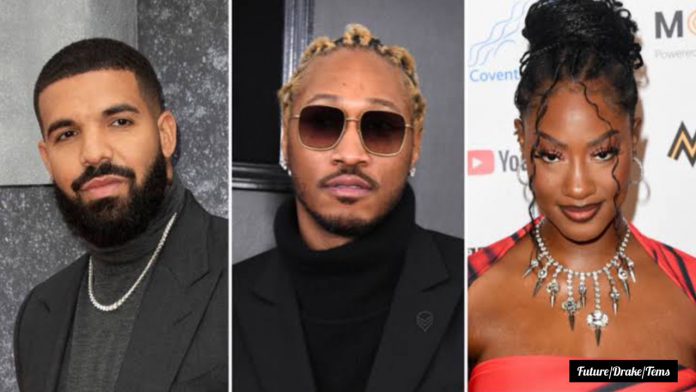 According to report, the Atlanta star secured his first Billboard Hot 100 No. 1 as a lead artist earlier this year thanks to the success of his “WAIT FOR U” single, which boasts appearances from Canadian rapper, Drake and Nigerian singer, Tems.

However, According to Chart Data, the track taken from Hendrix’s latest album I NEVER LIKED YOU — has been crowned Apple Music’s most streamed song of 2022.

Future celebrated “WAIT FOR U” going platinum back in May, which was the fastest collaboration released this year to reach the milestone.

“Wait for u’ platinum already,” Pluto wrote to his 7.3 million followers. “The support is appreciated #INEVERLIKEDYOU.”

The song won Best Collaboration at the 2022 BET Hip Hop Awards and is up for more silverware at the 2023 Grammy Awards, where it’s nominated in the Best Rap Song and Best Melodic Rap Performance categories.

However, I NEVER LIKED YOU also debuted at No. 1 on the Billboard 200, moving 222,000 album-equivalent units in its first week, the highest tally of Future’s career. The Freebandz boss became just the second artist after Drake to simultaneously debut atop the Billboard 200 and Hot 100.

US urges World donors to give more as Somalia faces famine