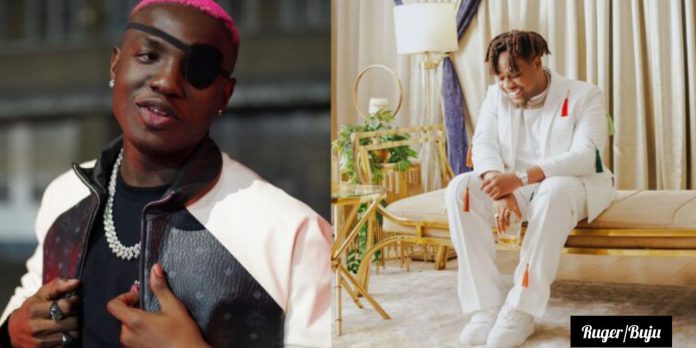 Talented Nigerian singers, Buju and his Colleague, Ruger in loggerhead on Twitter over how an artiste should top charts or host a show.

The clash started when Ruger who recently dropped two new singles shaded his colleague by saying he has been forcing his songs down people’s throats.

“I am something. For years now, I have forced my songs down people’s throat whether e sweet abi e no sweet either by too much ads or by paying every influencer to make noise about a song they don’t even like. Or by speeding my song on TIKTOK. WHAT AM I ?”

Meanwhile, Buju didn’t take this lightly as he throws back a jab to Ruger, reminding him that he had not headlined or sold out any show since he started out as a musician so it was impossible for him to top any charts.

“We know why you haven’t headlined any venue at all since you came in the game , not balmoral , not Eko hotel , not Muri Okunola , no even your father’s compound Or should be leave the country? … No headline anywhere? And you’re topping the chart ? Are we idiots? ” he wrote.

In response, Ruger fired back at Buju to mention five of his non-featured songs that would make his sold out crowd go crazy while he mentioned his.

“Buju baby all I need from you now is simple. I need you to list just five songs of yours that’ll make your crowd go crazy at your shows and I’ll list mine. No features, just your songs buju baby I’m waiting” he responded.

Invitational Tournament: It Is An Opportunity For Us To Learn About...

“How a personal issue affected me, broke me on my day...