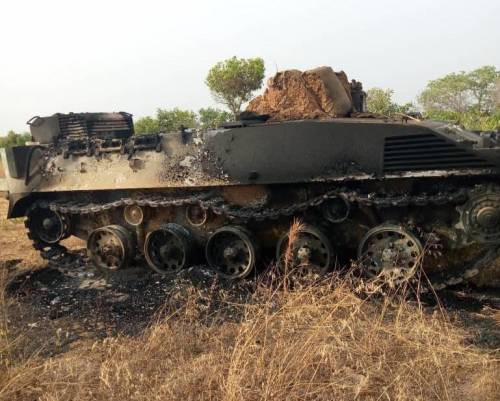 Eleven Nigerian soldiers have reportedly been killed in an attack by suspected gunmen on a military base in Birnin Gwari local government area of Kaduna state.

It was gathered that the gunmen who came in large numbers on motorcycles and carrying heavy weapons including rocket-propelled grenade (RPG), invaded the base at Polwire village on Monday night April 4, and engaged the troops in a fierce gun battle.

The gunmen were also said to have carted away several weapons from the troops.

The wounded soldiers were evacuated to Birnin Gwari General Hospital and 271 Nigerian Airforce Medical Center while those who were killed have been evacuated to the 44 Nigerian Army Reference Hospital Kaduna (44 NARHK) in Kaduna.

About 14 migrants die as boat catches fire in Senegal

Police head to court over time and location of Arise Ghana...

‘NDC will save Ghanaians from NPP’s toxic leadership’ – Ofosu Ampofo