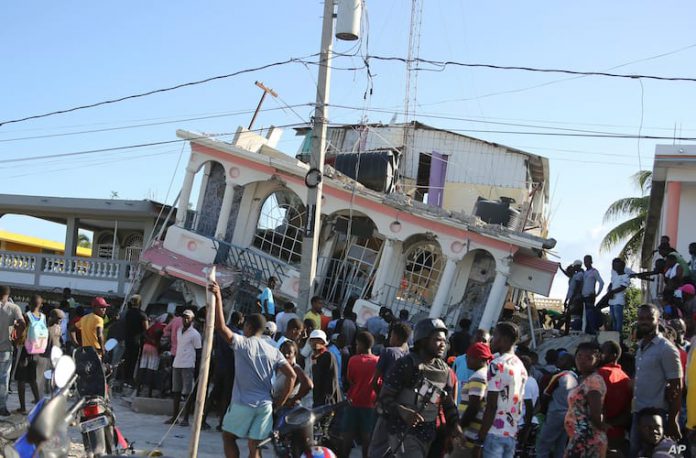 The death toll in Haiti after a 7.2 magnitude earthquake has risen to more than 700. Officials who stated this disclosed that at least 1,800 people were injured and more remain missing amid widespread damage. There also have been several aftershocks.

The temblor struck Saturday near the town of Petit-Trou-de-Nippes, about 125 kilometers west of the capital, Port-au-Prince, at a depth of 10 kilometers, according to the US Geological Survey.

Prime Minister Ariel Henry, who took office just three weeks ago after the assassination of President Jovenel Moise, said the government was mobilizing aid to the affected areas.

“The most important thing is to recover as many survivors as possible under the rubble,” Henry told The Associated Press. “We have learned that the local hospitals, in particular that of Les Cayes, are overwhelmed with wounded, fractured people.”

Henry declared a monthlong state of emergency for the country.

“The needs are enormous. We must take care of the injured and fractured, but also provide food, aid, temporary shelter and psychological support,” Henry said. He later boarded a flight to Les Cayes, in the island nation’s southwest.

Les Cayes, which is the largest town near the epicenter, reported collapsed buildings and major damage, officials said. Rescue workers were searching for survivors.

President Moise was assassinated in his home on July 7 and his wife, Martine Moise, was injured in the attack. Martine Moise, posted a message on Twitter on Saturday, calling for unity among Haitians: “Let’s put our shoulders together to bring solidarity. It is this connection that makes us strong and resilient. Courage. I am always by your side.”

“We’re concerned that this earthquake is just one more crisis on top of what the country is already facing, including the worsening political stalemate after the president’s assassination, COVID and food insecurity,” Jean-Wickens Merone, spokesman for World Vision Haiti, said, according to the AP.

Lets leverage on technology to build our economies – Ofori-Atta to...