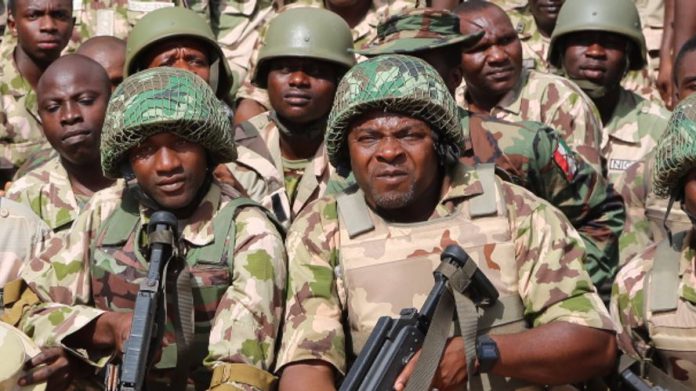 Some men of the Nigerian army have reportedly killed 10 people and displaced several others in a community in Cross River State.

The soldiers were said to be on a reprisal on June 26 in Nko community, Yakurr Local Government Area of the state, after one of their commanders was killed in the community, according to a report published by HumAngle.

It was gathered that the soldiers also razed some houses in the community, the paper reported with photos of burnt buildings sent in by witnesses.

The slain soldier was a part of the troops on a peacekeeping mission in the central part of Cross River where Nko and another community – Onyadama – have been engaged for about a decade in a violent dispute over farmland.

The police spokesperson in Cross River, Irene Ugbo, confirmed the death of the soldier.

The army spokesperson, Onyeama Nwachukwu, confirmed the attack on the troops.

“The troops were attacked and shot at with firearms. Five personnel who were critically wounded are currently under intensive medical care,” Nwachukwu, a brigadier-general, said.

According to NAN, Nwachukwu did not speak on the reported killing of residents in the community.

The army spokesperson in Cross River also said he can’t speak on the matter when reached for comment.

Meanwhile, the Cross River State government has announced the sacking of some traditional rulers in the warring communities.

“Government has ordered the sustenance of army operations in Nko community until those behind the shooting of the six military personnel are produced or fished out,” Obogo, the media aide to Governor Ben Ayade said.

Alexandria’s Antoniadis Gardens: Between Historical Remembrance and Standing the Test of...

‘We’re not sitting and not doing our work’: Eskom board chair...