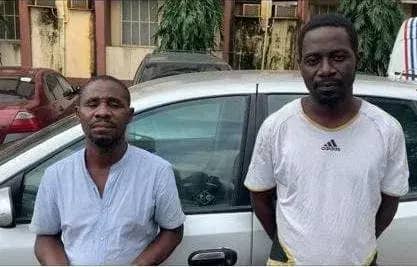 Two suspected members of a syndicate have been apprehended by the operatives of the Rapid Response Squad, RRS, in Lagos State Police Command for swapping supposedly real phones with fake ones.

The two suspects arrested were Chukwu–Emeka Ogbona (45 years old) and Kehinde Olabode(34 years old), who happen to be mobile phone technicians at Computer Village in Ikeja.

It was gathered that they were also in the business of advertising telephones on Jiji, an online marketplace. However, after an orders are made by online customers in Lagos, they deliver fake phones to them

The suspects were arrested after selling a fake phone to one of their oblivious customer at the rate of N120,000. During interrogation, they disclosed that they also exchange fake naira notes with the customers after receiving the real naira notes.

While explaining how the operation works, Ogbonna said, ” Leader of the gang is Ibrahim. He would advertise on jiji.com and supply us with real Iphone X and the fake Iphone X. The real Iphone X is N240,000 while the fake is an android phone made to look like an Iphone X. It is N30,000.”
He recounted, ” The Iphone X was advertised for N155,000. The buyer negotiated for N120,000. Knowing what I wanted to sell to him, I encouraged him to meet me at Olowu, after changing the location twice to ensure that we were not being trailed by the police.

“I showed him the real Iphone X while the fake one was in my back pocket. I took the real one back from him while we he was negotiating . As that was going on, he did not know I had arranged with other members to come around and distract him, so as to create room for me to swap the real Iphone X with the fake one. I gave him the fake one and collected 120,000, which we shared.

“ I stopped doing it at a time but resumed because I needed money to feed my family. Times are hard. We are many doing it. We call it street hustling.”

Olabode, the second suspect was alleged to have collected N100,000 and an Iphone 6S from an individual identified as Obinna. It was reported that Obinna agreed to exchange the aforementioned items for an Iphone X which ended up to be a fake phone afterall.

Some members of the syndicate, who are yet to be apprehended were said to have collected a large sum of money, amounting to millions of naira from unsuspecting customers who intended to buy vehicles advertised on the online marketplace.

The boss of the Lagos State Police Command, Mr Hakeem Odumosu has urged Lagosians to be cautious of fraudsters who pretend to be phone dealers.
He also advised that they should make sure they receive receipts with traceable address for every phone bought and avoid purchasing fairly used phones from unknown sources.

‘Ghosts and spirits are all around us’, says Gauteng psychic

eNaira app back on Google Store after 24-hour shutdown

ECOWAS: Democratic Reversals and the Crisis of Governance in...