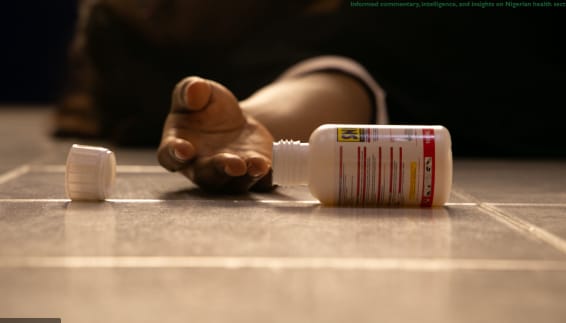 A 23-year-old lady, identified as Motunrayo Balogun, attempted suicide in Ondo State over an alleged breakup with her boyfriend.

The victim and her boyfriend were said to have a good relationship as they were always spotted together before the latter decided to end the relationship.

It was gathered that Motunrayo’s mother discovered her daughter gasping for breath on the floor of her room with the empty bottle of a sniper in her hands.

She was immediately rushed to a nearby hospital where she regained consciousness.

A friend of the victim who spoke on the incident said Motunrayo’s boyfriend restricted her movement and always monitored her whereabouts.

“The man does not give her breathing space. He is always monitoring her movement and everything she does. Yet, he doesn’t have regard for her.

“Even when she comes to work, three hours later, you will see him drive down to check up on her every now and then.”