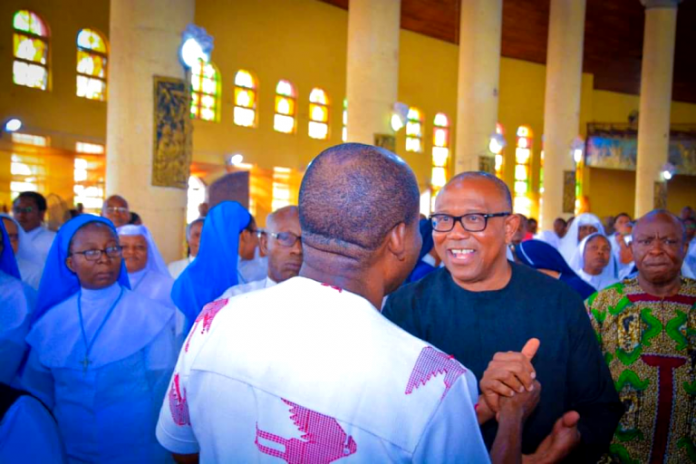 The occasion was the thanksgiving Mass for the Catholic Bishop of Awka Diocese, Most Rev. Paulinus Ezeokafor, who celebrated his 70th birthday.

Before the commencement of the church service, Governor Soludo stepped out from the pew where he was sitting and walked up to where the LP presidential candidate was seated to greet him.

Both hugged each other to the admiration of the congregation, with Soludo welcoming Obi to Awka before returning to his seat.

I’ve no rift with Obi—Soludo

Speaking during the thanksgiving Mass, Soludo insisted that there is no quarrel between him and the former governor of the state, Mr. Peter Obi.

The governor said: “Let me tell you, we, (himself and Obi), spoke two times just last night. We are brothers. You know I’m not one of those politicians that speak from two sides of the mouth. I can’t pretend. I’m a politician, but also want to make heaven. I’ll keep saying the truth.

School set on fire in North West – equipment, furniture and...

JUST IN: Buhari to unveil redesigned naira notes on Wednesday

I Did My Little As Anambra Gov, Soludo Should Do More...