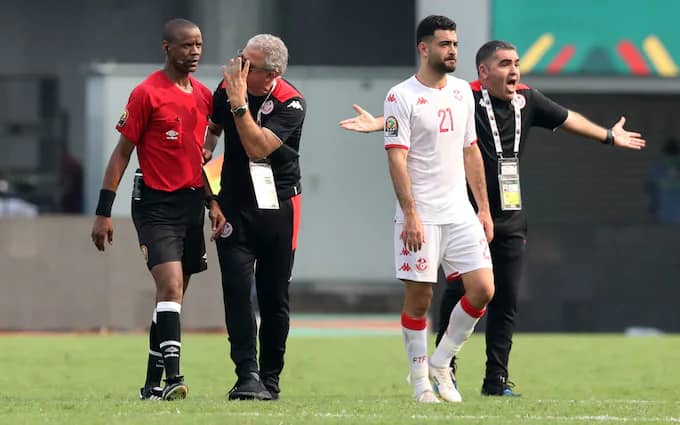 A bizarre moment has occured in the Africa Cup of Nations on Wednesday afternoon in a game between Tunisia and Mali – with referee Janny Sikazwe blowing for full-time in the 85th and 89th minute of the game, after a red card and two penalties took the game by storm.

The Group F game, held at the Limbe Stadium in Cameroon, got off to an mundane start after what can only be described as a poor first half, with no goals and just three yellow cards combined.

Yet just after half time, the game sparked to life as Mali were awarded a penalty in the 48th minute – which striker Ibrahima Kone of Sarpsborg in Denmark gleefully tucked away.

Amazingly, this was to be Mali’s only shot on target, with Tunisia pushing hard for an equaliser – and their efforts could have been rewarded in the 78th minute when former Sunderland star Wahbi Khazri was given the opportunity to score from the spot.

But his miss meant the Eagles were denied justice for their hard efforts. Amazingly, the referee then tried blowing for full-time on just 85 minutes, with five minutes of regulation left – before sending Mali striker El Bilal Toure off two minutes later.

And the game wasn’t to end without controversy there – with the referee blowing on 89 minutes and 42 seconds to leave Tunisia officials livid.

Tunisian coaching staff were beside themselves, immediately surrounding the fourth official who shunned them away at arms length.

However the players didn’t put up a protest, presumably as they had no idea as to how long was left. For a game that had two penalties and a red card in the second half, no stoppage-time is extremely bizarre. And stewards had to protect Sikazwe from seething Tunisian officials as they trudged down the tunnel.