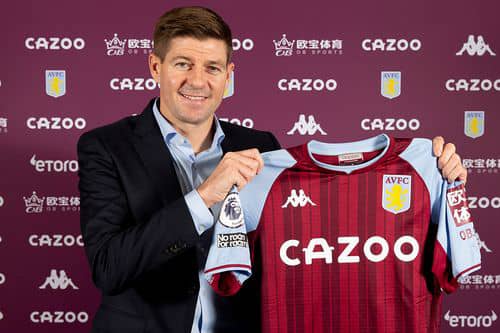 Aston Villa manager Steven Gerrard praised his players despite the 2-1 defeat by Liverpool on Tuesday night.

Sadio Mane’s 22nd goal of the season moved the visitors level on points with Manchester City at the top of the Premier League.

Gerrard told Sky Sports: ‘In terms of commitment, heart and application I cannot ask for anymore and at times we showed quality as well.

‘Disappointed in terms of the goals we conceded but we will look at that. In terms of what we brought to the game with and without the ball I can’t ask for anymore.

‘We want to be bold and ambitious. The other option is to wait and you can still lose that way and you will have more regrets.

‘We have good players and if we are calculated about it we can hurt teams but we have to cut moments out and need to be better. In summary we are disappointed with the goals and frustrated with the result.

‘We are a lot more dangerous with two number nines. At times we had to suffer. You are never going to play Liverpool off the pitch, they are high-level opposition and have a top manager but for large parts of the game we were in the ascendancy and we showed a lot of ambition. We had a lot of chances and Liverpool were never comfortable.’

Aston Villa could still have a say in the title race as they face Manchester City on the final day.

Gerrard added: ‘We will wait and see what situation we are in at the end of the season but we have a purpose to try and finish as high as we can. We want to push for the top 10 and it has to be about us. Let’s hope we can put ourselves in a good place going to City.’

Gerrard also revealed his frustration at referee Jon Moss’ performance after the official angered both sides at Villa Park.

‘I hope the referee’s performance is looked at,’ he added.