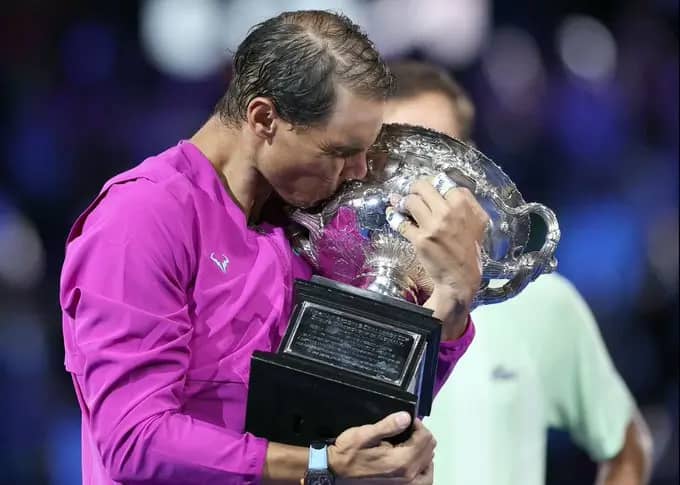 Nadal had the opportunity to overtake ‘Big Three’ rivals Novak Djokovic and Roger Federer on the list of major winners with only a second Melbourne triumph and first since 2009 in Sunday’s showpiece, but he looked to have blown that chance after falling two sets down to the 2021 US Open champion.

However, the Spaniard simply would not be denied as he defied his advancing years to come roaring back for an unlikely victory in a marathon final that will live long in the memory after going past midnight in more than five unforgettable hours on Rod Laver Arena.

Medvedev had three break points at 2-2 in the first set, with an errant backhand from Nadal putting him on the back foot as he trailed 2-3.
The confident Medvedev then broke again for 5-2 and eased into a one-set lead.
Nadal bounced back by racing into a 4-1 lead in set two but Medvedev broke back before being broken himself again and having to save set point after failing to take four break points while trailing 3-5.
Play was briefly suspended due to an intruder jumping from their seat onto court, with the situation quickly dealt with and the protestor apprehended by security and the police.

Medvedev claimed his fifth break opportunity and took Nadal to deuce on the Spaniard’s serve before a thrilling, topsy-turvy second set went all the way to a tiebreak, which the Russian won 7-5 with a glorious whipped winner down the line.
Nadal had a mountain to climb and failed to punish Medvedev in the opening game of set three, with the latter holding after saving break point.

Nadal later saved four break points to hold and take it to 3-3, later breaking again and serving out the set to increase hopes of an unlikely comeback.
The fiery Medvedev was notably unhappy with the noise of the heavily pro-Nadal crowd after every point, with Nadal then crucially avoiding a break early in the fourth set.

Medvedev then saved the first of two break points at 1-1 with an ace, but gave up the second with an untimely double fault.
He got a visit from a physio and then broke straight back, but Nadal kept up the pressure and brought up an incredible seven straight break points up 3-2 – finally securing the third successive break of serve as both players tired in an absorbing battle.

Nadal saved two break points in a key hold and Medvedev just about forced his opponent to serve out the fourth to tee up a winner-takes-all fifth set.
Medvedev started the decider with a gutsy but uncertain hold, but the irrepressible Nadal got the break to lead 3-2 with a stunning forehand winner after Medvedev had initially saved break point for deuce.

The long rallies somehow continued despite the exertion felt by both men and Nadal somehow saved three break points to hold and lead 4-2 to move within two games of that glittering record.
Medvedev then held serve and unbelievably mustered the strength to break for 5-5 as Nadal had prepared to serve for the match.
However, Nadal broke straight back and served out his 21st triumph at the second time of asking.

Coppa Italia: Okereke Fires Cremonese To The Next Round