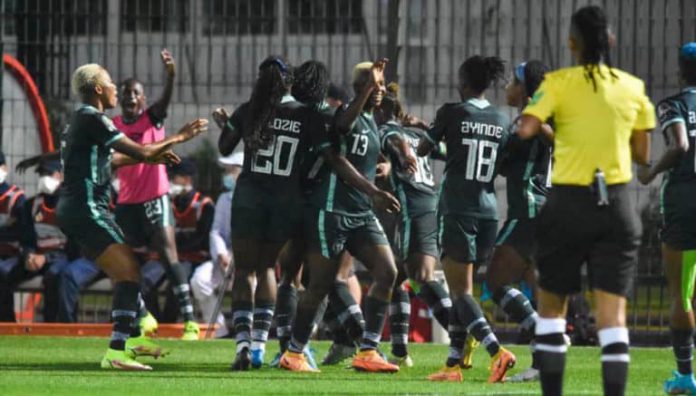 Having opened their campaign with a disappointing 2-1 defeat to South Africa, the Super Falcons of Nigeria, yesterday returned to winning ways and revived their hopes of advancing to the next round at the ongoing Africa Women’s Cup of Nations (AWCON) after securing a 2-0 victory over Botswana.

The Falcons who are the cup holder, opened  goal account in the 21st minutes following  Ifeoma Onomonu brilliant strike. The team doubled it with a 48th minutes goal from Christy Ucheibe .

The Randy Waldrum ladies are seeking a 10th AWCON title in Morocco, and will take on Burundi in their final group C game on Sunday for a chance to reach the quarterfinals.

Earlier on Thursday, South Africa sealed their qualification for the quarterfinals after beating Burundi 3-1.

The Banyana Banyana top the group with six points, followed by Nigeria and Botswana on three points each, while Burundi, who had lost 4-2 in their first game, are at the bottom of the table.

Meanwhile, all semi-finalists in the tournament will qualify to represent Africa at the FIFA Women’s World Cup in Australia & New Zealand next year.

The fifth-placed team will get an opportunity to also gain a place through a Playoff Tournament taking place early 2023.

Ministry of Education to open Creative Arts SHS in Kumasi

Bale: ‘I Already Feel At Home With New Club Los...