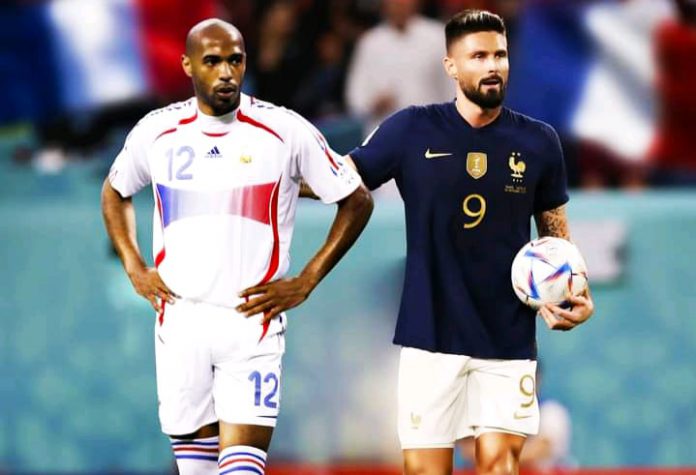 Craig Goodwin put Australia infront when he powered home a far-post finish in the 9th minute, but they then fell victim to France’s firepower led by veteran Giroud and Kylian Mbappe.

France have lost a host of players in the build-up to the tournament, including key striker Karim Benzema, midfielders, Ngolo Kante and Paul Pogba.

However, after falling behind against Australia, they made light of those misfortunes with an exhilarating offensive display.

After 27 minutes, France leveled, thanks to a header from Adrien Rabiot. After a spectacular Mbappe backheel.

He then set up Giroud for a straightforward finish five minutes later to put the defending champions infront.

A threat the entire time, Mbappe headed in Ousmane Dembele’s cross for his first goal of the tournament after 68 minutes before assistanting the fourth goal three minutes later.

He delivered the perfect cross for Giroud to score with a header. The goal moved the 36-year-old Giroud level with Thierry Henry as France’s all-time record scorer with 51 goals for the men’s national team.

Olivier Giroud also became the second-oldest player to score a brace at the World Cup, after Roger Milla, who scored twice in 1990 for Cameroon at the age of 38.

France were the first reigning champion to win their opening game of a FIFA World Cup tournament since Brazil in 2006.

Nyong’o calls for allocation of funds to deal with NTDs