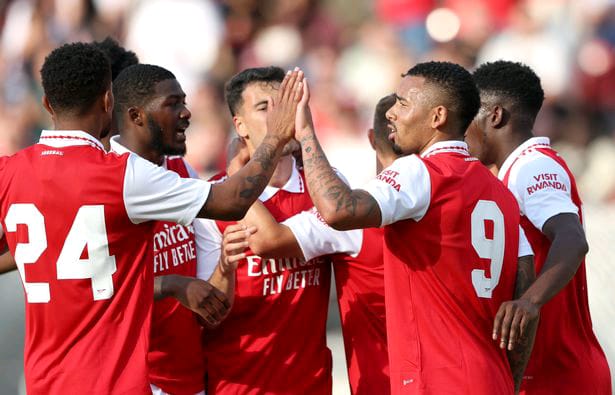 Arsenal duo Gabriel Jesus and Martin Odegaard have both been nominated for the Premier League’s Player of the Month award for August.

Jesus has immediately cemented himself as Arsenal’s first-choice centre-forward with six goal contributions from as many matches this term, scoring three and setting up three more.

The Brazil international had a hand in every goal during the 4-2 win over Leicester City, and he impressed against Manchester United despite coming out on the wrong end of a 3-0 scoreline.

Meanwhile, captain Odegaard followed up his brace against Bournemouth with the equalising goal against Fulham last month, and he has started every game for the Gunners so far.

The Norway skipper recovered from an ankle injury in time to feature in the defeat to Man United, and the Gunners – who are the only team with more than one nominee for August – remain top of the table after six matches.

The duo have now been recognised for their efforts with nominations for the first Player of the Month award of the season, but they are facing stiff competition to claim the individual accolade.

Manchester City talisman Erling Braut Haaland unsurprisingly takes up one of the eight nomination spots after amassing a remarkable 10 goals in his first six Premier League games for the club.

The 22-year-old opened his account with a brace against West Ham United before scoring back-to-back hat-tricks against Crystal Palace and Nottingham Forest, and he also hit the 25-goal mark in the Champions League against Sevilla in midweek.

No further players from the ‘Big Six’ clubs have been shortlisted for the award, where there is also a nomination for Brighton & Hove Albion’s Pascal Gross after his three-goal and two-assist haul to start the season.

Leeds United attacker Rodrigo has also thrived under Jesse Marsch with four goals from five Premier League outings so far, and he represents yet another attacking player up for the award.

“Rally round GSM for continued sports development in Oyo State” –...