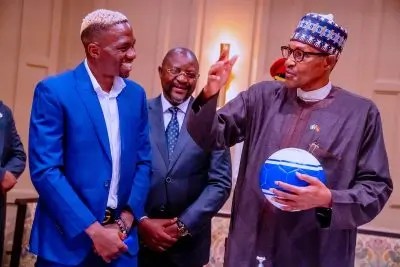 Omeruo, who was on the scoresheet last weekend for Leganes as they played out a draw  against Almeria handed out a signed jersey to the President.

In a video uploaded on Twitter by the Special Assistant to the President on Digital and New Media, Tolu Ogunlesi, Omeruo met the President in Madrid, the Spanish capital.

Buhari left Nigeria on Monday for Spain and has met with the Spanish President to sign a number of bilateral deals.
Omeruo is seen as one of Nigeria’s senior players, and is the longest standing member of the current Super Eagles, alongside Ahmed Musa.