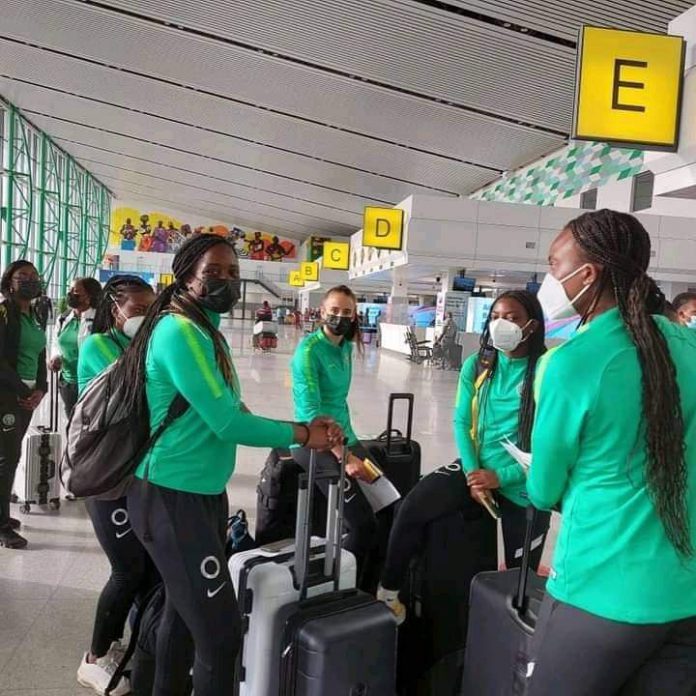 The second leg fixture is scheduled for the Stade Robert Champroux in Abidjan on Wednesday this week.

The Barcelona Femini forward missed the first leg fixture due to a hamstring injury she suffered while running on the eve of the game against Ivory Coast.

Reports indicate that “Oshoala won’t feature in the second leg against Ivory Coast due to sustained injures and may be out for another two months.”

Nine-time champions Nigeria put one leg into the 12th Africa Women’s Cup of Nations finals in Morocco when they defeated Ivory Coast 2-0 at the Moshood Abiola National Stadium, Abuja on Friday.

A brace by US-based forward Ifeoma Onumonu took the Falcons above the visitors in the two-match fixture, with the winners proceeding to the finals in Morocco, from where Africa’s representatives at next year’s FIFA Women’s World Cup would emerge.

Nigeria Football Federation, NFF which confirmed the date for the departure did not included time and the airport of their transit.

“The Super Falcons contingent will fly out of Nigeria on Sunday morning for the reverse leg, scheduled for the Stade Robert Champroux in Abidjan on Wednesday, 23rd February,” the federation said.

It is expected, however, that the team will fly out from the Nnamdi Azikiwe International Airport Abuja via Chatted Air Peace plane.