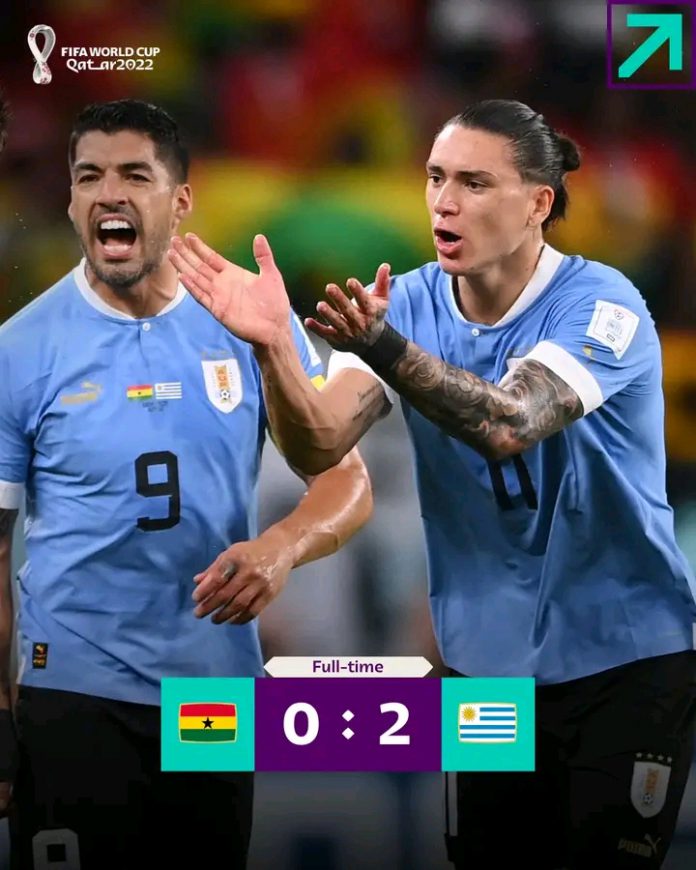 Uruguay beat Ghana but went out of the World Cup on goals scored as they finished third behind South Korea in Group H, despite Luiz Suarez’s heroics.

The Uruguay striker played a major role in both of Uruguay’s goals and the 35-year-old was in tears after the final whistle, following what may have been his last international.

Both goals were scored by Giorgio de Arrascaeta, the first a close-range header, the second a sublime volley.

In Group H’s other game, South Korea’s 2-1 victory over group winners Portugal was enough to take them through in second place.

Uruguay and South Korea both ended with a zero goal difference, but the side from Asia netted a total of four goals in their three games, with the South American team scoring just the two they managed against Ghana.

Suarez, whose handball in their previous meeting 12 years ago played a crucial role in sending his side through on that occasion, saw his shot fall into De Arrascaeta’s path for the opener, before the veteran former Liverpool striker followed it up with a glorious assist for the second.

There had been early penalty drama when Ghana striker Andre Ayew saw his spot-kick saved by Sergio Rochet at 0-0. The penalty was awarded by the referee after reviewing the goalkeeper’s foul on Mohammed Kudus on the pitchside monitor.

‘Too late to save them’: South Africa’s SOEs broken beyond repair

Gift of the Givers comes to aid of Turkey and Syria...